In the story, Pius is the ‘pet’ of a nobleman named Gianvincenzo Pinelli. But really, he’s more a family friend. He is very intelligent, and he aspires to be a servant in the nobleman’s household. The eponymous ‘Venetian Detective’ is Francesco Sagredo  – one of Pinelli’s closest friends, and he has a real soft spot for Pius. Here is a snippet from a scene in the book involving Pius: 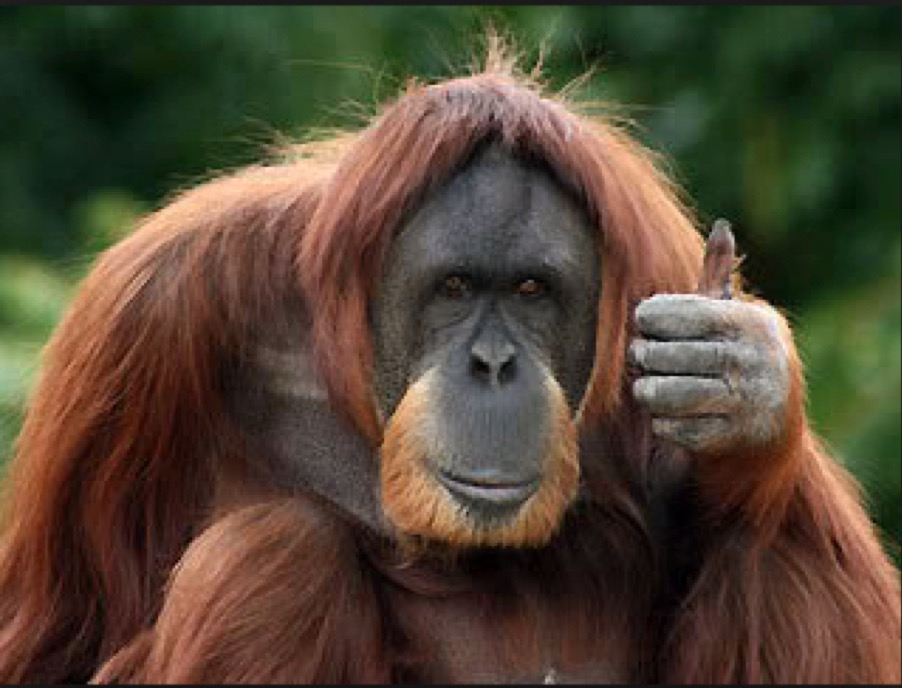 “Could you please fetch us one of the bottles of the Chianti that arrived this morning, Ajith?”

Pinelli turned to me, Henri the parrot flapped a little and moved to the back of my friend’s chair. “This is exquisite. It comes from our family winery near San Gimignano.”

“I think Pius would like to serve you, will that be to your liking, sir?”

Pinelli grinned at me. “Of course. Where is the rascal?”

A few minutes later, Ajith was back in the doorway with Pius beside him stretching up with his ridiculously long arms to take the tray from the servant. “Please be careful,” Ajith said quietly.

Pius bared his teeth and made a high-pitched squeal in the back of his throat, turned on his heel and came towards us, the tray steady in his hands.

I had known Pius almost as long as I had been a friend of his master, many years before I had been exiled from the Republic. He was an orangutan who had arrived on a ship delivering tea from Ceylon, and had, according to his previous owner, come originally from a place called Borneo. Nobody could explain how he had been living in Ceylon, and sadly, although he was a very intelligent beast who possessed some uncannily human characteristics, he did not possess the power of speech, so perhaps we will never know.

My friend, the Conte had named the ape Pius as a little irreligious joke and claimed to trusted friends that his hairy servant was more intelligent and better-looking than the last Pius in the Vatican, Pius IV, who had died some thirty-seven years earlier. Gianvincenzo had spent many hours training his pet and Pius loved the attention. Indeed, he appeared not to see himself as a ‘pet’ at all.

For Pinelli, this effort was more than an idle pastime. He was fascinated by the intelligence of the orang-utan and planned one day to write a treatise about him. We often talked about how some animals have almost human intellect and pondered how it was that certain species far exceeded the mental capacities of others. After much discourse, we had narrowed it down to a simple matter of brain size.

Pius waddled over with what on a human face would have been a cock-sure grin. Arriving at a small table between our chairs, he placed the tray on the edge and carefully slid it into place.

The orang-utan ignored him, brought a glass over to me, which I took and then he handed the other to his master. Lifting the bottle, he stood before the Conte to show him the label before pouring a perfect measure into Gianvincenzo’s glass and then into mine.

Pius bowed and started to retreat to the door.

Henri flapped his wings again and bobbed his head. “Idiot Pius!” he squawked.

I heard the ape make a sound so like a laugh it was almost frightening. Without breaking his step, he reached the door where Ajith stood looking on, a nervous expression still imprinted upon his features.

“Will there be anything else, sir?” the servant asked.

“Nothing for the moment, Ajith. But, if any of my guests arrive before we have finished our business here, please take them to the drawing room and allow Pius to continue with his sterling work.”

For more of Pius, Francesco Sagredo, Pinelli and many other characters check out THE VENETIAN DETECTIVE by Michael White on Amazon.