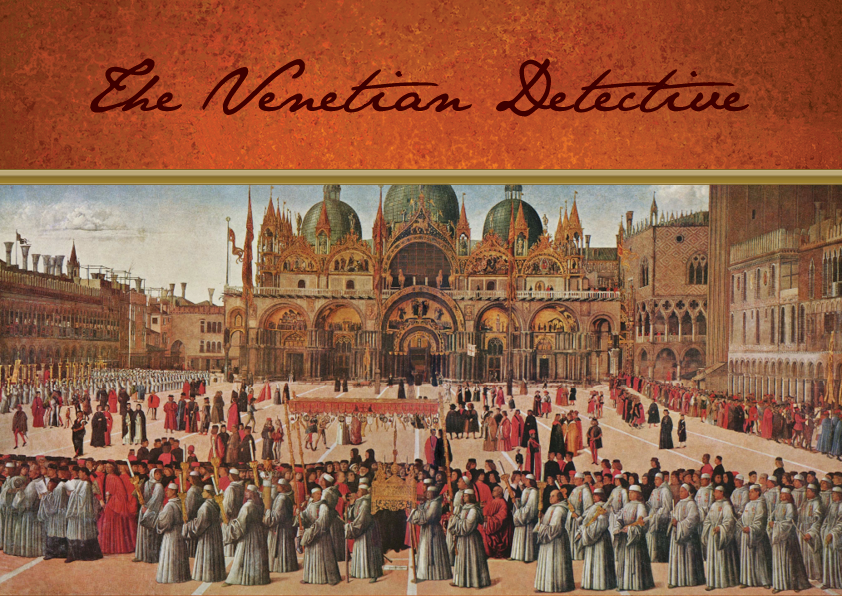 Venice, 1592
Francesco Sagredo, a medic by training, has just returned to Venice after more than a decade travelling to the East. Seen as an oddball by some, but beloved by the Doge who has promoted him to the Council of Ten, he knows many secrets. He uses science and Eastern knowledge to solve crimes. From China, he has learned about fingerprinting; from Persia, he has a microscope; from India, he understands the value of autopsy and forensics. He is a modern man in the Renaissance world.

In 1592, Venice is the centre of the world and our story involves many great names who rub shoulders with Francesco – Galileo, Giordano Bruno, Pope Urban VIII, Shakespeare, Queen Elizabeth I, King Philip of Spain and King Henry IV of France, the ruler of The Holy Roman Empire (now Germany) and occult expert, Rudolf II.

THE VENETIAN DETECTIVE begins with the murder of a young prostitute, Antoinette. But soon it becomes clear this was no spontaneous one-off, but the work of an insane serial killer calling himself Saviour who seeks to cleanse the Republic of those he considers ungodly, mutilating the dead to symbolise their deviation from Holy Doctrine.
Francesco believes he can track down the killer using skills no one else in Europe is even aware exist. In the laboratory in his house he begins to peel away the layers of the mystery applying empirical rigour and intelligent deduction.

But the Republic lies under the dark shadow of the Inquisition. It is only twenty years since the St. Bartholomew’s Day Massacre when the Church sanctioned the slaughter of 30,000 protestants in Paris. The Counter Reformation instigated by The Vatican still extends tenticles of power to King Philip’s Spain, Henry IV’s France and The Holy Roman Empire (Germany). The murder mystery at the heart of the plot unfolds against a backdrop of political and religious intrigue. The arch-heretic, Giordano Bruno has been arrested in the city and put on trial. The Pope wants to get Bruno to Rome so he may be ‘absolved’. To this end, His Holiness has sent his heretic-hating right-hand man, Cardinal Santora Severina.

Within this climate of fear even Francesco’s science and reason is suspected as heresy. And when someone close to him is set to become Saviour’s final victim Sagredo has to use the full range of his abilities to catch the killer and bring him to justice.